Rise n' Shine. Oops - it's 4:45am, no sun for another 2.5 hours. Ah well, onto the airport shuttle bus at 5:15am and at the Vancouver airport by 5:30am where we joined the very long line to check-in with Air Transat. Forty-five minutes later we had our tickets and proceeded through security - no problems. Then for breakfast at the White Spot...er, no. Major renovations at Gate D, so the only option was A&W or Tim Horton's - we went to the former and had bacon and eggs on toast. At 7:05am we decided to head over to our gate, and upon turning the corner, quickly realized the plane was almost completely loaded. We were the last ones to board.

Thinking we were going to depart on time, we quickly learned differently. An airplane inspection, which was supposed to occur in Panama, was rescheduled to occur now. That put our departure behind by 20 minutes. Then, during the inspection, they discovered frost on the wing and called for the de-icer. I was baffled. Since when does frost form on the wing of a plane in Vancouver when it's +7C? Anyway, we were finally left the gate at 8:03am, 28 minutes behind schedule. 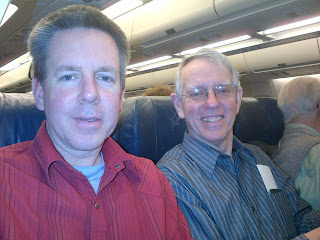 The flight was like any other - long and uninteresting. It took nearly an hour to get a drink, and nearly 3 hours to get some food. There were two movies, both of which weren't that bad: Moneyball and Crazy, Stupid, Love. The remainder of the journey was spent playing Sudoku and studying the bird guide.

We approached Panama at just before 6:00pm EST, flying first over Colon and Gatun Locks, and then following the canal north to Panama City and then lining up for a westbound landing. Just prior to touching down I spotted Cattle Egret and Black Vulture, and as we taxied along the runway I spotted 3 Smooth-billed Ani's and a flock of Great-tailed Grackles. Other than at Vancouver airport a Red-tailed Hawk on a guy-wire and a Coyote running parallel to one of the aprons, that was it for wildlife for the day.

As we near the front of the plane, we cleared customs relatively quickly, claimed our bags, and got our rental car. Everything went very smoothly, until I used the GPS to navigate to the hotel. We got hopelessly lost, and what should have been a 30 minute drive, turned out to be 45 minutes. We also paid nearly $5 in toll fees because we kept ending up one the wrong road. Once at the hotel we checked in, unpacked, and went for some groceries. There have been some major changes to the roads in the canal area, and several of the areas I knew quite well have changed. We returned to the hotel by 9:15pm, and I wrapped up the day my writing this posting.

Tomorrow we are going to Old Gamboa Road and Summit Gardens. Depending on how that goes, we may even pay a quick visit to Gamboa Park and Ammo Dump Ponds. Until tomorrow, happy birding wherever you may be.
Posted by Michael Preston at Tuesday, February 14, 2012